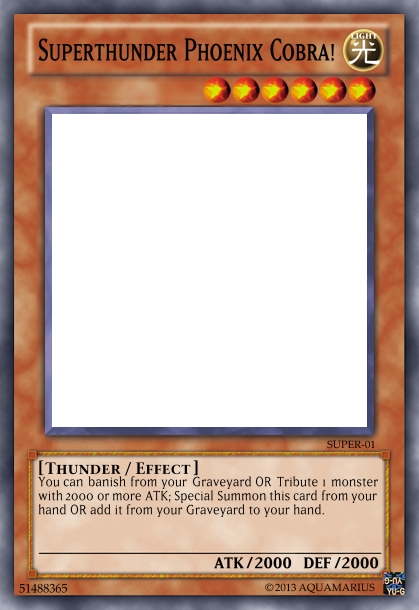 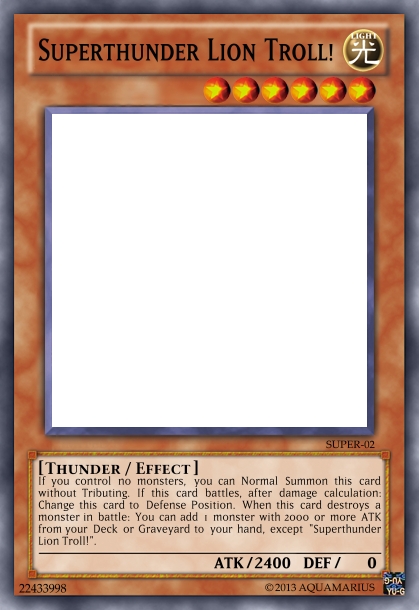 If you control no monsters, you can Normal Summon this card without Tributing. If this card battles, after damage calculation: Change this card to Defense Position. When this card destroys a monster in battle: You can add 1 monster with 2000 or more ATK from your Deck or Graveyard to your hand, except "Superthunder Lion Troll!".

While this card in face-up Defense Position: You can declare a card name; swap the original ATK and DEF of all monsters with that name and change their original Level to 6 until your opponent's next End Phase, regardless of location. If this card is sent from the field to the Graveyard: You can add 1 "SUPERTHUNDER!!" or monster with 2000 or more ATK from your Deck to your hand. Each effect of "Superthunder Megafluff Rabbit!" can only be activated once per turn. 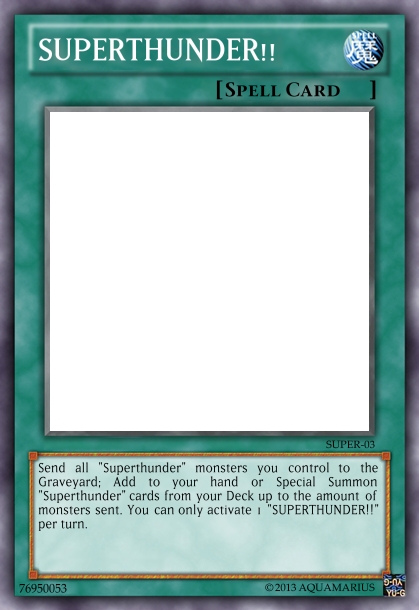 Send all "Superthunder" monsters you control to the Graveyard; Add to your hand or Special Summon "Superthunder" cards from your Deck up to the amount of monsters sent. You can only activate 1 "SUPERTHUNDER!!" per turn.

Worried about Rabbit and Troll as potentially too powerful in decks that like being able to toolbox their big monsters, in particular ones with hand effects, like Ancient Dweller of the Deep and Ultimate Tornado of the Far East. And, of course, Savior Soldier. I would like Superthunders to be capable of functioning as support for big monsters, but I don't want them to be too powerful, of course, and Savior Soldier in particular worries me... 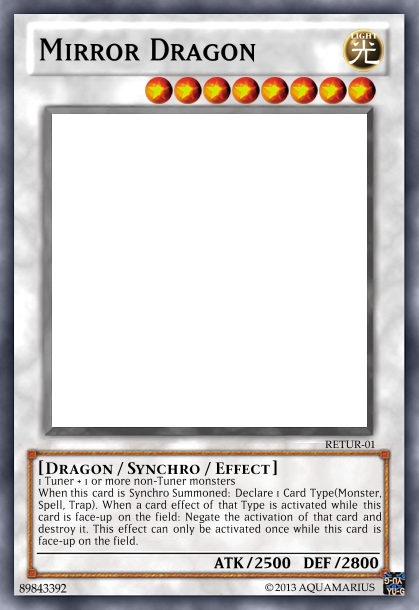 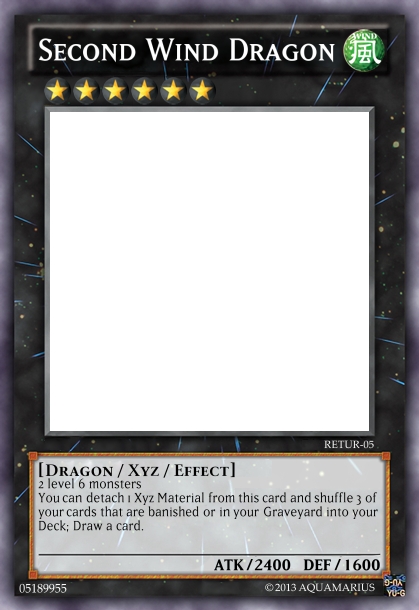 2 level 6 monsters
You can detach 1 Xyz Material from this card and shuffle 3 of your cards that are banished or in your Graveyard into your Deck; Draw a card. 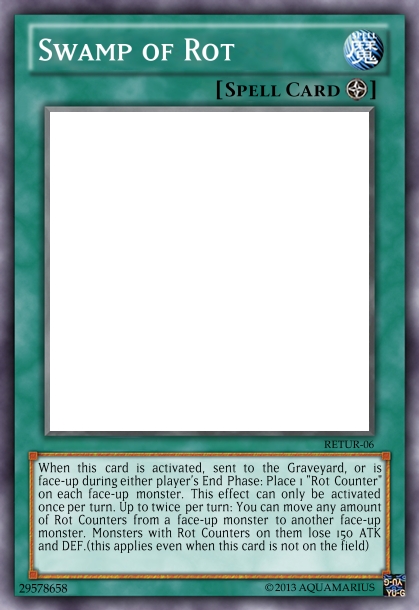 You can banish 1 monster in your Graveyard; Special Summon this card(from your hand). When this card is Summoned: You can select 1 of your banished monsters; This card gains that card's Attribute(s), Type(s) and name as long as it remains face-up on the field.

This card gains the Attribute(s) and Type(s) of all your banished monsters. This effect is always active, and cannot be negated.

Done. Could I get some feedback, please?

I've been told that Lion Troll is probably too much: Should I add an effect saying that if it's battle position is changed by it's effect, you can't change it's battle position until the end phase of your next turn, except with a card effect? Here's what it would look like: 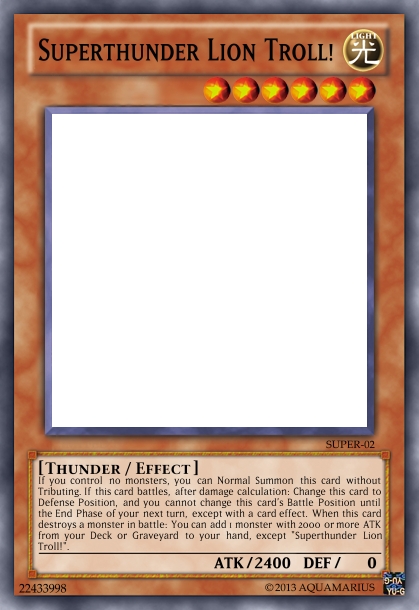 If you control no monsters, you can Normal Summon this card without Tributing. If this card battles, after damage calculation: Change this card to Defense Position, and you cannot change this card's Battle Position until the End Phase of your next turn, except with a card effect. When this card destroys a monster in battle: You can add 1 monster with 2000 or more ATK from your Deck or Graveyard to your hand, except "Superthunder Lion Troll!".

EDIT: I've also been told Lion Troll doesn't need the restriction on adding another Lion Troll, seeing as it searches through battle, and not just plain freebies from summoning.

Swamp of Rot would be nice but damn would it take awhile to manage all of the ATK/DEF changes it does since they follow the monster to the Graveyard.
_________________
MALEVOLENT UPRISE @ 1

The counters are not intended to follow the monsters into the Graveyard. And I'm not sure which piece of card text could imply that.

Also, out of these cards I am pretty much the most worried about Rainbow Sorcerer. You can send a Soul Eating Ghoul, and a Ceraunozoa/Dimension Mantis, and 4 others: Then, you can SS Soul Eating Ghoul by shuffling the 4 others, then banish dimension mantis/Ceraunozoa to recycle a Spell or Trap and draw a card. That's a +3 off of a single card. Any ideas?

Rainbow Sorcerer is pretty much busted.

It can pretty much revives an old dead deck into something quite powerful just by existing.

Knight is pretty much a generic Kizan that can be a +1 in decks such as LIGHT-EARTH fusion. It also allows a wider selection of fusions in the deck, which will be really nice.

Added a lv4 or lower restriction to Rainbow Sorcerer's mill effect meaning less boss monster shenanigans. Also, Superthunder Megafluff Rabbit can now call any monster name and swap that monster's atk/def and turn it into a lv6 until your opponent's next end phase, instead of just applying it to itself.

Soup, what old dead deck are you talking about, exactly? Rainbow Fusion? Cuz remember, Rainbow Sorcerer can't mill cards with multiple Attributes, because that would mean it'd have the same Attribute as another one of the milled monsters. Well, unless you mill a DIVINE monster: that'd allow you to mill a single double-attribute monster, but I don't think we have one of those.

I'm talking about the Advanced Fusion Art variant, which run differently from the more popular, later version. Sorc's milling is easy to abuse by simply tuning your deck in a way that you'll have all 6 of the attributes all the time. Sorc can clear your grave by recycling stuffs, sending 6 is instant Yurlungur set-up, due to one of them is potentially Shooting Star Bird, and if you don't get Yurlungur, you can still use the grave for big Time and Space Chamber plays. And you can run Elemental replenishing since it'll be guaranteed that it'll nab you a card. Card also makes an OTK with a Yurlungur and Time and Space Chamber to be easier to achieve (summon this and use the on-summon effect, mill 6, banish Shooting Star Bird, targetting a Solar emperor or something else, drop yurlungur, mill LIGHT, WIND, FIRE for Solar Emperor, activate Time and space to fusion summon another fusion(preferably the one that got targetted by SSB, then OTK. 2 Yurlungur also do quite the same thing.)

And yes, I'm aware about the whole multi attribute thingies. In short, easy selective mill is never balanced, it can even revive a pretty dead deck from beyond the grave.

I guess I'll remove Rainbow Sorcerer then. Maybe I'll add it to this post later if I find a way to balance it.

meanwhile, knight also need a nerf since it's a generic kizan that can easily be a +1 in many decks. Not to mention it can literally be a Kizan for every archetype, and LIGHT do have a lot of support already.

EMSOUP wrote:meanwhile, knight also need a nerf since it's a generic kizan that can easily be a +1 in many decks. Not to mention it can literally be a Kizan for every archetype, and LIGHT do have a lot of support already.

How about removing the name copying effect?

I'm more concerned about the banish to summon effect. Can easily trigger Skullblade, Dimension Mantis, Silent Knight of the Thunderclouds and Ceraunozoa.

Mirror Dragon is fine-ish. Having the ability to block 1/3 card types is fine, but as a Level 8 it feels too accessible to many decks. Perhaps being pushed up to 9 would require just a bit more thought to make.